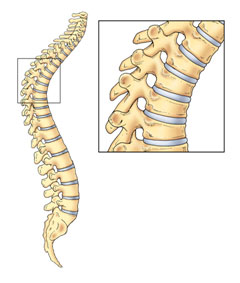 Hyperkyphosis (forward bend of the thoracic [ribbed] vertebrae beyond normal limits) is classified as either postural or structural in origin.

Postural kyphosis is flexible and will correct when the patient is asked to stand up straight. Patients with postural kyphosis have no abnormalities in their vertebrae shape.

Instead of normal, rectangular vertebrae with ideal alignment, wedge-shaped vertebrae cause misalignment (Figures 1 and 2). This process occurs during a period of rapid bone growth (usually between the ages of 12 and 15 in males or a few years earlier in females). The kyphotic curve that develops with growth frequently remains mild and requires only periodic x-rays.

Patients often have poor posture and complaints of back pain, which is most common in early teenage years and less so as they approach adulthood. The pain rarely interferes with daily activity or professional careers. The kyphosis is more likely to be painful the apex (most angular section) is in the mid-to-low back instead of the upper back. In severe cases, adolescents may not be able to lie on their back without several pillows under their head. 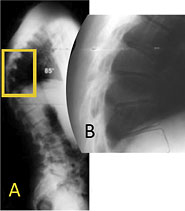 Observation is typically recommended for:

Standing, long-cassette (scoliosis) x-rays are taken every six months as the child grows. If the child experiences pain, an exercise program is usually recommended.

Figure 3. On the left is a side-view of a patient with Scheuermann's kyphosis. On the right is the same x-ray after he was placed in a hyperextension brace.

When the curve is moderately severe (60° to 80°) and the patient is still growing, brace treatment in conjunction with an exercise program may be recommended. The brace fit must be regularly evaluated and adjusted to ensure optimal correction.